The need for finance has become even more critical due to the disruption to trade caused by the pandemic. Shared Interest has continued to empower smallholder farmers and artisans to grow their businesses sustainably, increase trade, and create employment opportunities by providing a reliable source of finance during otherwise uncertain times.

Over the past year, we provided access to finance for farmers and artisans across Africa and Latin America, and fair trade buyers in the Northern Hemisphere, extending our support indirectly to producers in Asia. Our aim is to be a trusted and respected provider of ethical finance, with a particular emphasis on working with vulnerable groups that other lenders are less keen to support. As their businesses grow, these groups are able to improve their income and to contribute to the alleviation of poverty in their respective communities.

We pride ourselves on offering good customer service, working with producers and buyers through times of hardship. Sixty percent of our customers have been with us for more than five years.

Under normal circumstances, we keep in touch with our customers through regular visits, as well as email and telephone conversations. This year, we were able to carry out a total of 40 customer visits across all regions before the coronavirus outbreak was declared a pandemic. Following this, we introduced a virtual due diligence process and additional controls, along with a variety of digital platforms to maintain communication.

Our portfolio is split into three regions: Africa, Latin America and Northern Hemisphere and Pacific Rim (NHPR). We have an overseas presence in Costa Rica, Ghana, Kenya, and Peru, where the local knowledge has helped us grow the proportion of direct producer lending. In total, we have 202 customers, consisting of 174 producer groups and 28 buyers. We approved 36 new lending proposals (16 new customers and 20 facility increases for existing customers) totalling £8.3m in the year (including coffee £3.7m and cocoa £2.5m.)

Overall, there was an increase in lending but the number of payments decreased by 30% compared to the previous year, due to a number of factors. This year, many buyer orders were delayed due to the pandemic, which meant that, in some cases, repayment periods for short term lending were extended. For example, instead of a producer borrowing against two orders during the year, they have borrowed funds against one order but for a longer period.

Of the total payments made on behalf of buyer customers, a large proportion (38%) went to Asia and the Middle East. Due to political and economic constraints, it is difficult to lend directly in these regions, therefore our relationships with buyers are essential to reach disadvantaged communities here.

Coffee remains our largest focus, mainly due to the scale of Fairtrade coffee production, with more than half of all Fairtrade certified producers growing this commodity. The total lending for coffee has increased from 44% in 2019 to 47% in 2020.

Due diligence and management of our risk portfolio

We balance the desire for our lending to reach those who need it most, with the need to avoid placing our members’ capital is at excessive risk. To achieve this, we implement a rigorous due diligence process, including customer visits.

To control our country-related risk we use an independent evaluator organisation called Coface9 , which provides a country categorisation of A to D, with D being the riskiest. Prudential limits are then set to manage our exposure to countries in C and D categories. According to Coface, corporate insolvencies are set to increase by one third worldwide between now and 2021. The pandemic has further weakened sectors that were already vulnerable, including retail, and textiles/clothing. This rise in country risk, as assessed by Coface (using macroeconomic, financial and microeconomic data), is reflected by 71 Country Risk Assessment downgrades, i.e. slightly more than 40% of the economies covered worldwide. 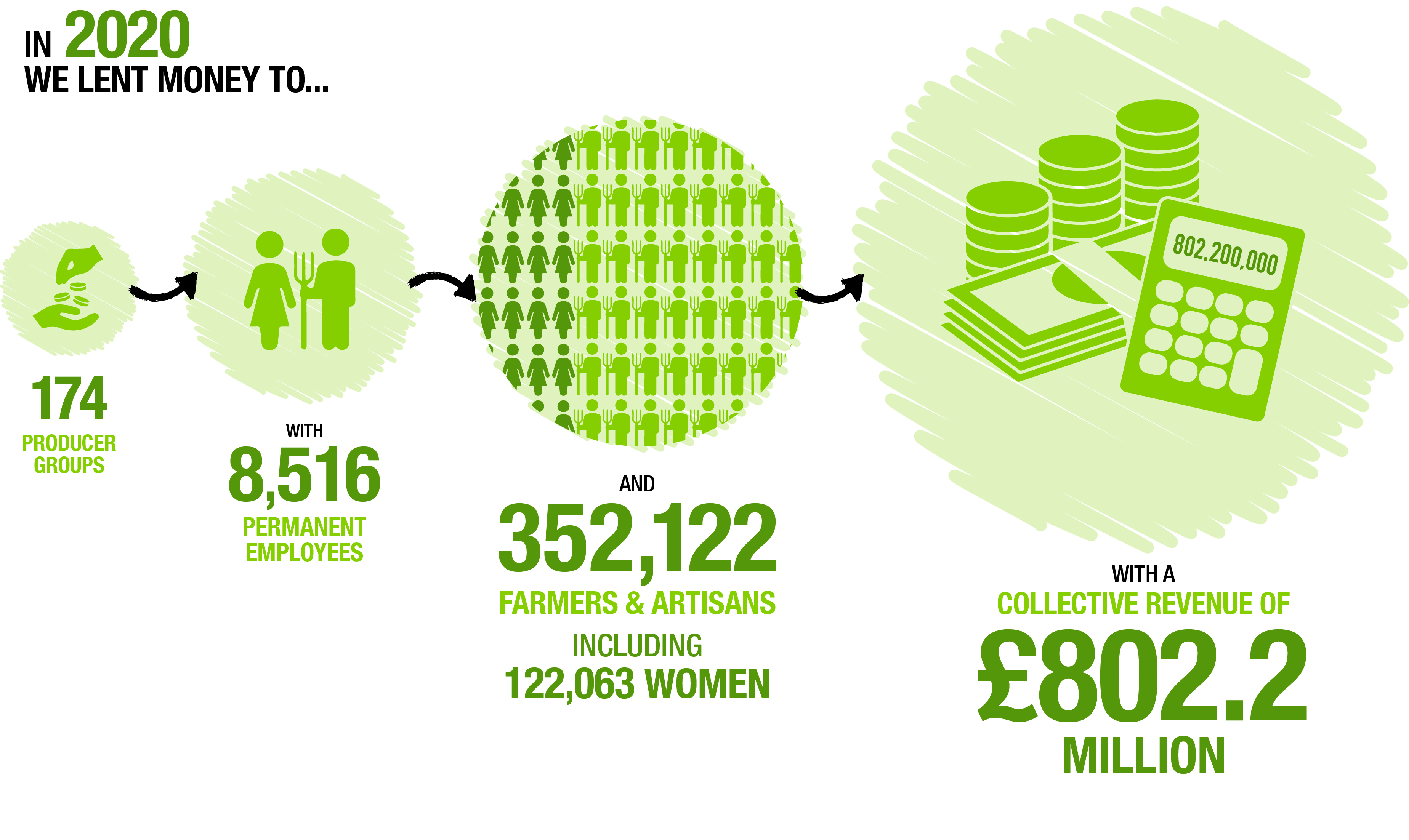 Our lending in Latin America

Despite progress made towards the achievement of the Sustainable Development Goals, analysts estimate that ‘lending volumes are nowhere near what is needed to achieve the sector’s impact potential because the lending economics simply don’t work to reach the majority of the unmet market demand.

According to a report from the Food and Agriculture Organization of the United Nations, Latin America and the Caribbean is a major food exporting region, responsible for 14% of the world's production of agricultural and fisheries products. This region exports 160 billion USD’ worth of products annually. Eighty-seven percent of these are destined for other regions of the world. 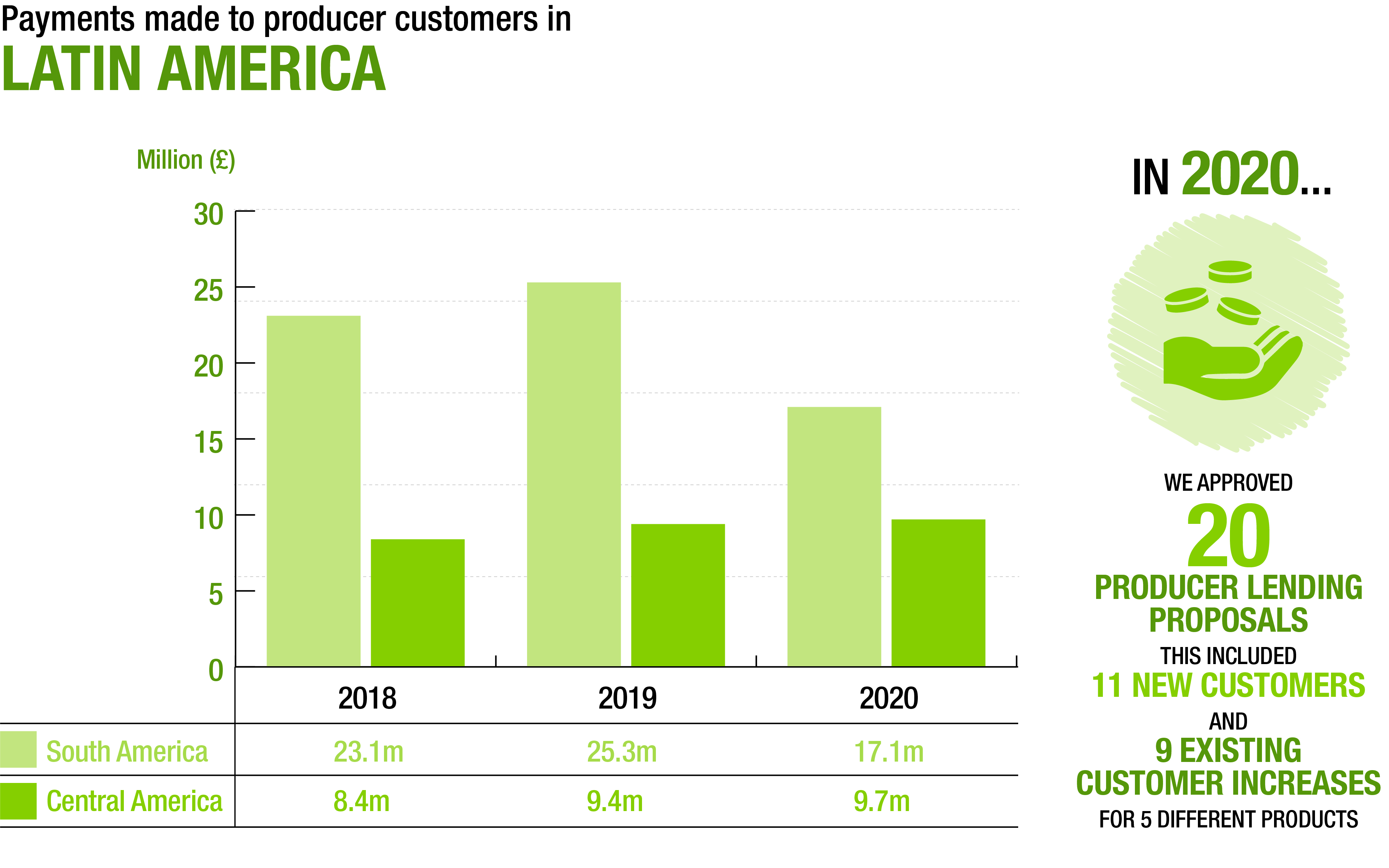 Our lending in Africa

The agriculture sector employs about 70% of the population in most sub -Saharan African countries and accounts for 25% to 30% of GDP, yet the sector receives less than 5% of commercial bank lending (CSAF State of the Sector Report, 2019). Of the 174 producer groups in our lending portfolio, 91 are based in Africa (52%). This represents 307,001 producer individuals, including 112,413 women.

We made £7.3m of payments to producers in Africa, equalling 21% of the total payments sent to producer customers this year, and a decrease of 46% compared to last year. 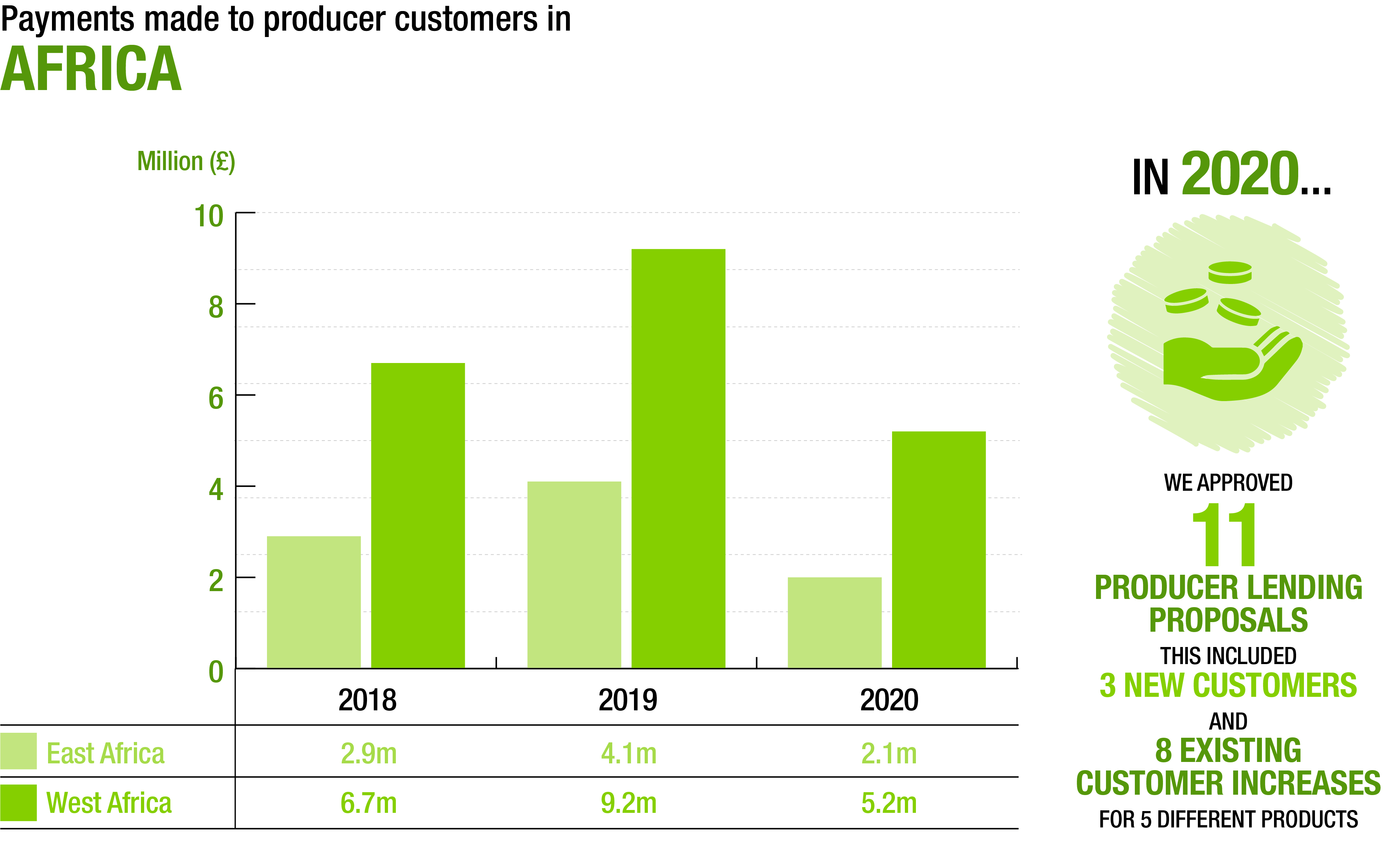 Our lending in Northern Hemisphere and Pacific Rim

This region consists mainly of buyer organisations based in North America and Europe with two producers in Asia, bringing the total number of customers in this region to 30. Shared Interest is one of the few social lenders to provide credit facilities to buyer organisations in the Northern Hemisphere.

The portfolio in this region is diverse; there is no predominant crop or product. Most customers are importers who sell a variety of products ranging from processed foods such as cookies and cereal bars, to jewellery, clothes and home décor.

Shared Interest works with many buyers, who need to balance stock levels to meet demand. Other buyers might only negotiate contracts with producer groups if their customers have asked specifically for their products. In both of these instances, our line of credit plays a crucial role, as without the availability of these funds, the buyer would not be able to make a payment to the producers. 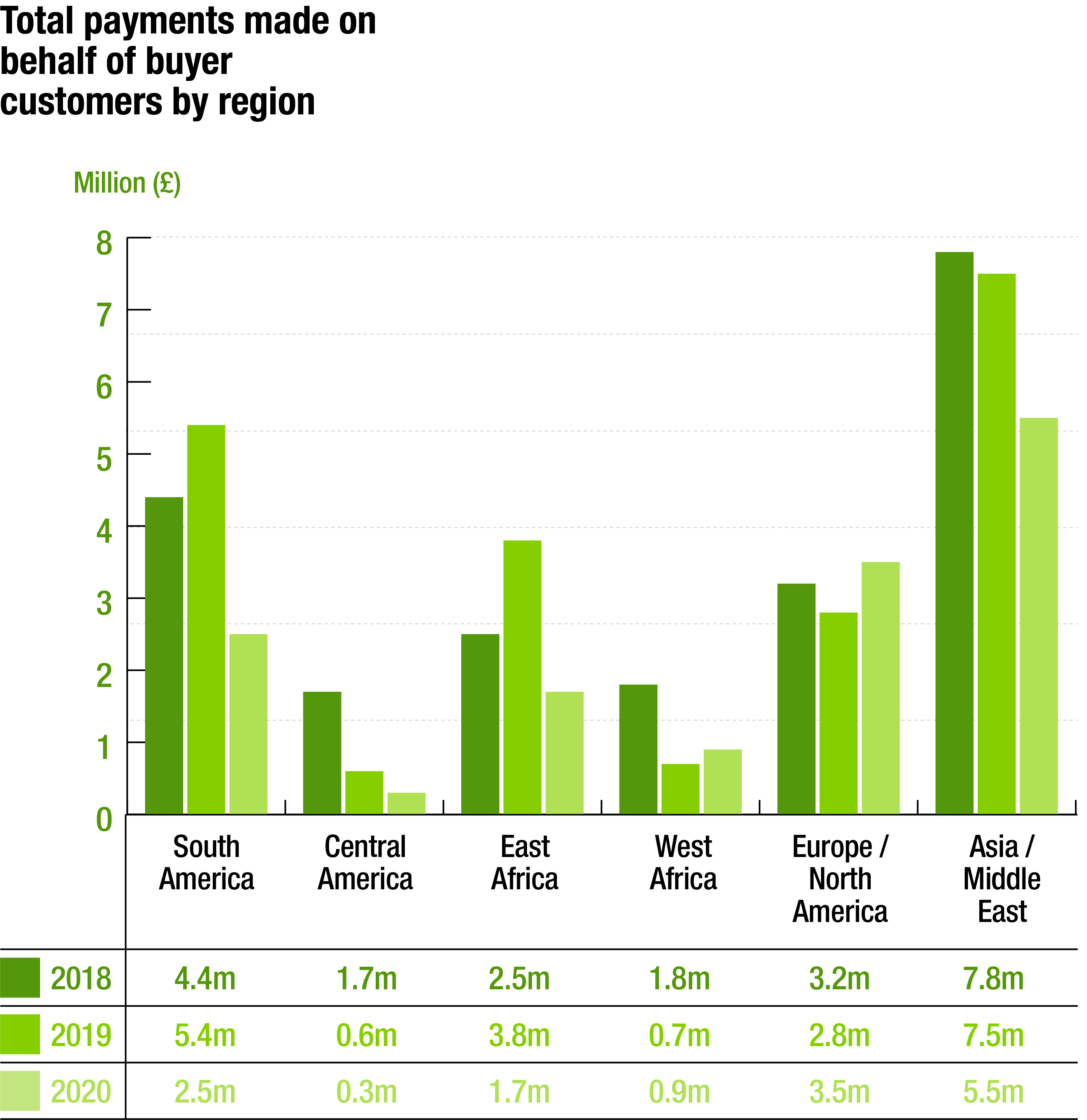